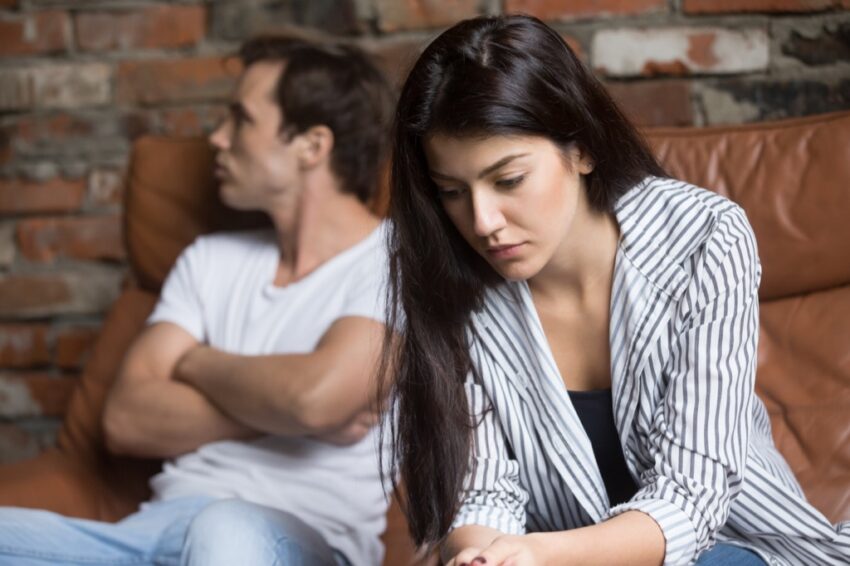 A beautiful relationship between the couple will come to an end if one of them is unfaithful towards the other. Do you have an assumption that your husband is dishonest and might have affairs with other people? In that case, look out for some warning signs which may prove that your husband is indeed disloyal to you.

8 Warning Signs You Have An Unfaithful Husband

Starting from feeling guilty to putting the blame on you, and spending more time outside to lacking intimacy, there are several signs that can expose your husband’s illegal affair. If you notice any of these signs, it is highly likely that your husband is unfaithful to you.

1. Always on calls or messages

Here is one most common warning sign that implies your husband is unfaithful towards you. People who have extramarital affairs tend to stay on their phones all the time. For instance, he might be talking with someone on the phone for hours without any break while acting flirty. If not, he might be busy texting someone on his phone the entire time without giving you any attention.

2. Not giving his phone to you

Another sign that is an indication of a cheating husband is not lending his smartphone to you. People who cheat are likely to avoid giving their phone to their partner so that their infidelity would not be exposed. In addition to that, he locks his mobile phone with new passcode, which you are not aware of. If you ask for the password, he is likely to refuse to say it.

Prioritizing his looks and external appearance since some period is often a need-to-look-out sign which indicates your husband’s cheating intentions. There could be something fishy if he is choosing stylish outfits but saying that he is not going anywhere other than the workplace.

Similarly, if your husband often goes out while dressing elegantly during nighttime for several days, then it might be that he is meeting another person behind your back.

For instance, if your husband is choosing decent clothing, building his body, giving more time to grooming, applying lotions or perfume more often than before, it means that he is hooking up with someone else.

4. Visiting places or going out from home more often

Visiting other locations and not staying in the house more frequently is another typical sign that your husband is having an extramarital affair. Your husband appears to be busy with more work that comes up during weekends, late nights, or there could be some sudden business vacations as well.

However, remember that several people who are maintaining an affair tend to give the above-listed answers if you ask them why he is not spending much time with you. Keep in mind that frequent business trips, late-night outings, and not going home for days are some serious signs, which clearly indicate the unfaithful behavior of your so-called husband.

5. Spending more money than he used to before

If your husband’s expenditure is getting more than usual for the past few days or months, it is something you need to be aware of. For instance, he could have taken his affair to the finest restaurant, spent a hefty amount of dollars on her shopping, and made hotel reservations quite often.

If you find him buying gifts frequently that are not for you, you have to think about who he is buying them for. If you want, you can cross-check by calling his parents, siblings, or other loyal friends to know if they receive any gifts from his husband. If not, then you may have to confront your husband.

It is possible that your husband becomes emotionally distant from you. He may try to avoid showing affection to you and might appear hesitant to share his sentiments or even talk about his daily life with you.

Though your spouse may be physically beside you, he could look like he is thinking about someone or getting lost in his own thoughts without caring about his surroundings.

7. Lack of intimacy with you

Intimacy makes the husband-wife relationship better and closer. If your husband is not intimate with you like he used to be before, there is definitely something wrong. Sometimes, he might not be willing to show affection to you even if you initiate the first step.

One reason could be that he may have lost interest in you after finding another person (with whom he is having an illegitimate affair). Another reason could be guilt. Yes, you heard it right. There are some people who would not get intimate with their wives after having an affair as they feel guilty.

8. Picking fights with you and becoming extremely defensive

Starting random fights with you more frequently is another sign that exposes the unfaithful behavior of your husband. He might begin quarreling even on simple issues and make it big and end up keeping the guilt on you. Whether you are simply asking a question or just talking to him, he will start arguing with you.

While going out, if you ask him where he is going, he will act extra defensive. In addition to that, he may try to behave like you are accusing him and having doubts about him. Not just that, your husband will attempt to start the reverse method, which means that he will blame you for cheating on him, even if you did not.

In case if your instincts tell you that there is a chance that your spouse is having an affair behind your back, then the above-listed signs could help you conclude whether it is true. Due to that, it is vital to look out for those signs, which clearly indicate that you have an unfaithful husband.

The Top 7 Games You Can Play On Your Computer At A Live Casino Online! Try Your Luck In Live Blackjack!

Can You Withdraw Money From Bitcoin Revolution – 2022 Guide

What Does It Cost To Make A 2D Animation Explainer Video?