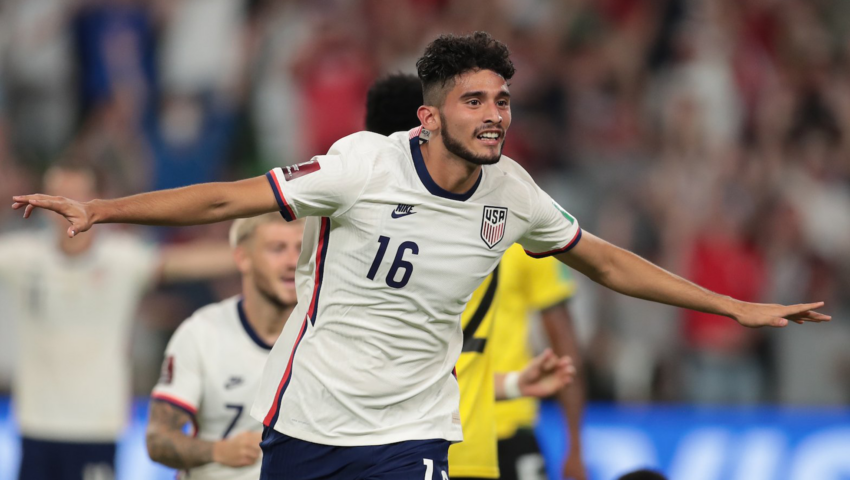 The US men’s national soccer team has the potential to reach new heights. While they are unlikely to win the next FIFA World Cup, the finals of which will take place in Qatar in 2022, they could well make the quarter or even the semi-finals. They could well be worth a bet. Heck, at current odds of 100 to 1, it could well be worth placing a smallish bet to win it!

Though, most of the current favorites are from Europe, with two exceptions from the South American teams. Brazil is currently joint-favorites with France on 6 to 1, and Argentina is 6th favorites on odds of 12 to 1 along with Germany, Italy, and Belgium. The US is currently the 14th joint-favorite with Mexico.

However, many are now looking to see the fruit of the United States Men National Team go a very long way with the caliber of players in their ranks going to Qatar 2022.

These players are beginning to show the world their capabilities while they represent some of the best teams in European football leagues ranging from Juventus, Chelsea, Barcelona, Augsburg, Borussia Dortmund, RB Leipzig among many other top clubs that dominate the UEFA Competitions.

Moreover, the likes of Christian Pulisic, Sergino Dest have fall down the pecking order in their respective club actions, but the likes of Ricardo Pepi has been an outstanding player for Augsburg in their bid to escape relegation despite having to lose against Bayern Munich in a thrilling encounter that saw the Allianz Arena’s team defeating the WWK Arena’s team even though the Bayern was touted by the sportingbet to win emphatically with 1.21 odds

More so, there can be little doubt that big-name players count for a lot. , you see names like Lionel Messi, Robert Lewandowski, Cristiano Ronaldo, Harry Kane, Karim Benzema, Kylian Mbappe, and Romelu Lukaku. All of these guys play their soccer in Europe, which is the bone of their nationals team dominance in recent years.

But the United State Men’s National Team has a few, as well as the likes of Brenden Aaronson, who play his trade with Red Bull Salzburg in Austria, Christian Pulisic with Chelsea in England which is considered the best league in the world according to FIFA and UEFA coefficient, Gio Reyna and Tyler Adams with Borrusia Dortmund and Red Bull Leipzig respectively in German Bundesliga, why the likes of Sergio Dest play for Barcelona in Spain and Weston McKennie for Juventus in Italy.

Though these guys play for some of the top clubs in European football, and their experience could prove invaluable, but one of the most valuable weapon in the hand of Gregg Berhalter is the Augsburg center forward, Ricardo Pepi to whom his versatility and hold play would made the likes of Weston McKenzie and Christian Pulisic flourish better in the coming Mundial.

However, the likes of Brazil, Belgium, Germany and the world defending champion, France are looking to establish their footballing prowess as the best footballing nation in the world.

Despite their sheer willingness and star studded footballers who see making waves in their respective clubs, participating in the world cup is always a different story as each teams are looking to be among the best rank as possible and for the likes lf United States, they will equally need to be on their toes to be among the best in the coming world cup.

More so like how the team turnover their lackadaisical outing against Honduras when the United States homegrown talent stole the headlines as the then 18-year-old Ricardo Pepi, who plied his trade for FC Dallas and was making his debut appearance for the USMNT, turning the game around despite having the team veterans available for such vital match

Not only did he score the winning goal in the 75th minute, but he also recorded two assists. With more performances like he had in the second half, young Pepi could well be one to watch in the future – he could even be a candidate and a good outside bet for the Golden Boot award in Qatar.

Though the likes of Harry Kane, Kaylian Mbappe, Cristiank Ronaldo, Romelu Lukaku, Robert Lewandowski would be vying for the golden boot in the unprecedented summer world cup in Qatar, but with Ricardo Pepi tenacity, versatility and drive, the American international could be well poised to be the highest goal scorer in the World Cup tournament ahead of the best players in the game

Moreover, the United State Men’s National Team have shown complacent in their recent matches, but the emerging USA players all over the world  is a reference to the advancement in rank and quality of a country that did not have a league till 1995

Despite having to succumb to high performing footballing nations in their previous two World Cups in 2010 and 2014 in the round of 16, while the United States’ previous outing in 2006 was just a group state participants, the new energetic and more balanced team will be looking to advance beyond the quarter-final in 2002 which was their best outing since their constant participation from 1990

But the prowess of Zack Steffen, Christian Pulisic, Sergino Dest, Weston McKenzie, Gio Reyna, and the versatility of Ricardo Pepi, the United State Men’s National Team could well be a place to emulate their best World Cup outing with a third-place finish despite going against the odds to at least be in the semifinal with +7000 odds

6 Tips to Enjoy Your New Car

Reasons You Should Use Feet For Measurement Instead Of Meters

Why Business Insurance Rates Need to Be Compared and How

Do You Need To File A Claim? Here Are 3 Reasons Why You Should Hire Social Security Disability Lawyers Vs. Going At It On Your Own!